The Golden Age of VC in Southeast Asia is Here

The Southeast Asia Venture Capital landscape is bright. In 2021, the region has minted 20 unicorns, surpassing any previous decade's total. About a quarter of these are in the fintech space, followed by approximately 20 per cent in e-commerce.[1]

We should bear in mind that, just five years ago, Southeast Asia wouldn't have made it on any map for top global allocators. Seen as merely part of the Asia pool, only 2% of total VC funding had been allocated to the region at the time.[2]

But today? The region is primed with some of the youngest demographic countries in the world and a rising middle class. We're seeing rapid digitalization, a thriving tech ecosystem, increased consumer spending, greater capital flows... And the rest of the world is paying attention. 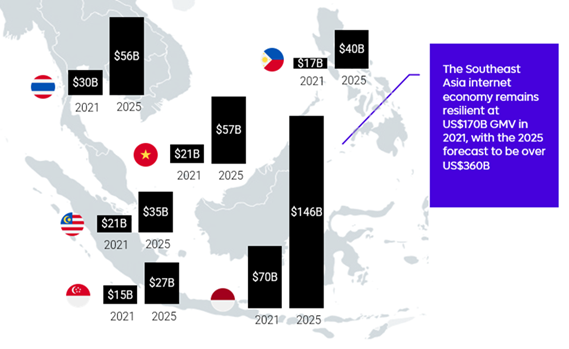 Southeast Asia's potential is grounded on strong macro tailwinds. We look at the region through three broad data lenses:

1. Population: The third-largest region globally with a young and urbanized, tech-savvy demographic.

According to the e-Conomy SEA research report (Google, Temasek, Bain & Company), 40 million new internet users came online in 2021 for the first time. This means at least 70% of the entire population is now online.

Perhaps expectedly, COVID-19 led to an acceleration of digital consumption and first-time users. One in three digital merchants believed they would not have survived COVID-19 if not for digital platforms. E-commerce, food delivery and online media, particularly, prove to be key consumer sectors which are driving growth in the Southeast Asian digital economy.[3]

Venture Capital is giving accredited investors access to a class of investment that has become, globally, an increasingly large share of value-creation. Best-in-class, top quartile VC Funds have been known to outperform other indices in both the public and private sector.[4] 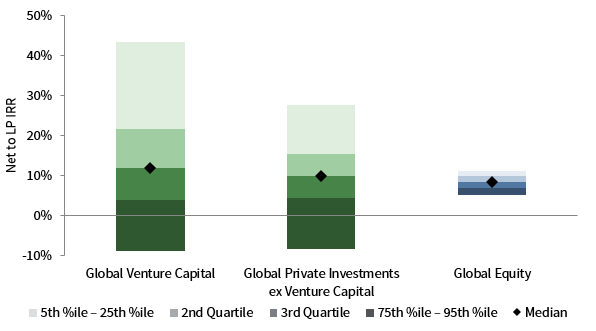 The picture, when focused on Southeast Asia, is no less impressive. Within the last decade, the number of registered VC Funds with a mandate to invest in the region have tripled in the last decade.[5]

Even with the challenge of a global pandemic, there have been record levels of VC activity in the region. Particularly for early-stage deals, capital raising and funding have been extremely successful with the number of early stage deals (Series B or below) multiplying by 16x between 2010 and 2020.[6]

Global VC Investment on the Rise(a)

With such resilience and entrepreneurial energy, we expect the Southeast Asia VC landscape to continue growing over the next few years.

We're seeing a maturing of the capital ecosystem i.e., smarter capital coming in at later stages and a higher number of exits. M&A activity continues to be the main driver for startup exits in Southeast Asia. According to the recent Southeast Asia exit landscape report by INSEAD and Golden Gate Ventures, M&A accounts for up to 80% of deals in comparison to IPOs and secondary sales.

Investor optimism towards the Southeast Asia technology ecosystem in 2021 has also fueled positive sentiment for acquisitions. The Southeast Asia Exit Landscape Report also reported that more than half of Southeast Asian executives said they were looking to pursue an M&A in the next 12 months.

Some significant exits in the region have included:

With the current trajectory, we expect Southeast Asia to follow China in terms of the growth of its startup landscape. This year alone, the region has minted 20 unicorns - more than the total number of unicorns over the last decade. We expect this number to continue growing over the next few years.

Selection of Unicorns in SE Asia(a)

TNB Aura looks at similar demographic, but more mature venture ecosystems (like China and India) as a precedent for the present growth opportunities in Southeast Asia.

Also of note: Singapore ranks fourth globally for the average time it takes for startups to cross the US$1B threshold valuation and reach unicorn status.[9]

And, as you might expect, people are flocking to develop the next unicorn in the region. A young, urbanized demographic with money to burn and evident technophilia proves to be fertile ground for the world’s next big tech startups.

The Golden Age of VC is here indeed in Southeast Asia. At TNB Aura, we've seen the gamut. Both graduates and experienced founders are recognizing this new market to launch their next brilliant idea - and the excitement is palpable.

To learn more about our team and how we work, get in touch.

At TNB Aura, we are investing in and helping to build the future of Southeast Asia. As a thesis-led, high-conviction venture capital firm, we use data-driven methodologies to identify and invest in select companies that are primed for the future and ready to change the very face of their categories.

An approved co-investment partner of Enterprise Singapore, we invest US$2-10 million into Series A and B tech startups - and beyond that, we become true partners in their quest to uplift lives of The Next Billion.

Find out more about Charles

Find out more about Vicknesh